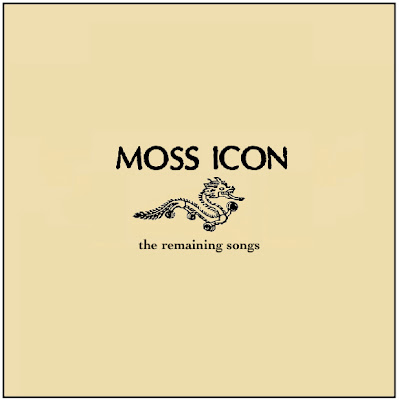 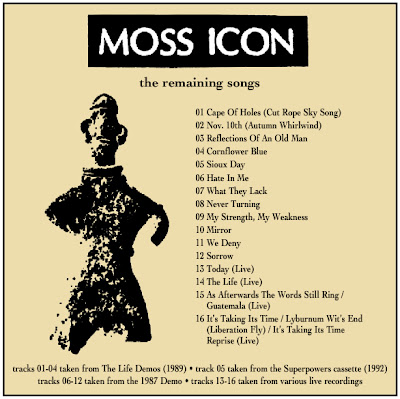 When i first started this blog i posted a 2xCD Moss Icon discography that i put together from various sources, which, aside from the studio material, included demo tracks, live tracks, and even the Breathing Walker cassette. In fact sharing this amazing collection was one of the reasons i started this blog. Moss Icon has been a huge infatuation of mine ever since i heard the Mahpiua Luta 7" in 1989, and has been a favorite of mine ever since. Over 20 years later i can still listen to songs like Kick The Can or Hate In Me and think that Moss Icon may very well have been the greatest punk band in the US (of course then i'll hear something else and think the same thing, but that's besides the point). Unlike many of the bands from that time that have faded from memory, Moss Icon remaisn timeless for me. Needless to say when i heard the band was releasing a complete discography i nearly stained my good jeans. For me, this was the most anticipated discography i could ever think of. When i finally got my hands on the 2xCD version, i was a bit disappointed that this wasn't a "complete discography" at all, but more like an anthology. I found this really odd, as there was more than enough room on these 2 CDs to include everything the band had recorded, or at least released. I can understand maybe not including the 1987 demo, which i love, but i'd wager the band doesn't think too highly of it at this point. What i can't understand is the exclusion of songs like Cape Of Holes, Nov. 10th, or Sioux Day. Songs that are every bit as good as anything on the band's 3 7"s, or the Lyburnum LP. I also don't understand why they didn't include that killer intro to Kick The Can from the Mahpiua Luta 7" version. Still, i'm glad this was released, and the sound is excellent. It's great to finally have the Hate In Me 7" and the Silver Bearing split LP in quality sound.


When i finally got this blog rolling again, i deleted the Moss Icon post because of the upcoming discography, leaving only a collection of live sets you can still grab here. But since so many songs didn't make it onto the official discog, some of which are crucial to the band's output, i've decided to compile them here. I "remastered" the tracks as best as possible, removing any background noise and making other adjustments, and not to pat myself on the back, but they sound better than ever. My advise would be to pick up the discography CDs or LPs, and download this collection, to hear What They Lack. Enjoy.

The first 4 tracks were taken from The Life demo, recorded in 1989. I only included the 4 songs that were not later released on various records, aside from Cornflower Blue (featuring Daniel Littleton of The Hated, and Michael Littleton of Ida), which was included on the False Object Sensor compilation LP released on Vermiform Records in 2001. Since it was left off the discography, i included it here. Reflections Of An Old Man is the music from the intro to Kick The Can, but with lyrics. These 4 songs are up there with the best of the band's material.

Track 5 (Sioux Day) was on the Superpowers cassette released on Troubleman Unlimited in 1992.

Tracks 6-12 is the entire 1987 self-released demo tape. This is a great raw sounding recording. The first 2 songs, Hate In Me and What They Lack, were re-recorded a year later for the band's first 7", and Mirror was re-recorded for the Panx Vinyl Zine 3 compilation 7" released in 1989. Mirror was also included on the Lyburnum Wit's End Liberation Fly LP, recorded in 1988 and finally released in 1993 on Vermiform. Most all the band's other records were rleased on Vermin Scum Records. The four remaining tracks were exclusive to The Life demo, and never re-recorded, or even appeared anywhere else as far as i know.

Tracks 13-16 are various live recordings, dates and venues unknown. The song Today is an unreleased song. Great sound quality on these live songs, especially the last two, which were from the same show.