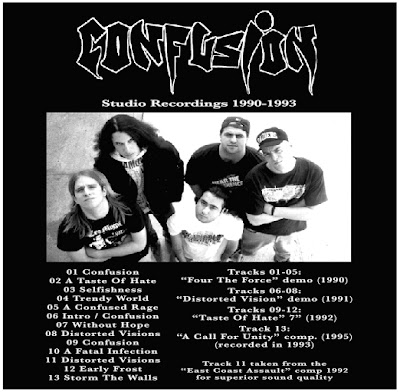 Heavy metallic hardcore from Brooklyn, NY. The demos are in the vein of the heavier NYHC bands like Breakdown, Fit Of Anger, Maximum Penalty, Dmize etc. As time went on the band tuned to a more metallic approach, while still retaining an angry as fuck hardcore vibe. They pulled it off better than most in my opinion. Killer shit. Enjoy.

My next post will be a Confusion live CD with a set recorded live on WNYU's Crucial Chaos on Feb. 13, 1992 and a full set from City Gardens recorded in March of 1993. That should be up in about three weeks. The live stuff kills as well. I want to thank bassist Mike Scondotto for all the great music he's decided to share, for all the art and info, and especially for choosing my blog as a home for this monster of a collection. Cheers!

CONFUSION BIO: by Michael Scondotto
Confusion started in the summer of 1990 as the second wave of NYHC was coming to a violent end. Bands that had initially inspired Confusion (like Killing Time, Breakdown, Sheer Terror, Outburst, etc.) were either breaking up or changing their sounds, and the CBGB Sunday matinees were gone by the fall of 1990. It was also during this time that Brooklyn forged its own scene outside of NYC at places like L'amour and the infamous Crazy Country Club. The bands that made up the Brooklyn scene were Confusion, Patterns, Lament, Merauder, Life of Agony, Darkside NYC, Nobody's Perfect, Judgement Day NYC, and non-Brooklyn bands like Subzero, Dmize, and a little bit later bands like Starkweather, Next Step Up, and All Out War. Confusion's first show was in August of 1990 in a backyard in NJ with Lament, Patterns, Merauder, Dmize and Social Decay...I was there, but I was not the bassist yet. I did become the bassist about a week or 2 later after they kicked out the original bassist and asked me to audition. I was a high school senior and about 2 and half years into Hardcore and my old band Close Call was done so I was like "why not".

I don't think by any means that Confusion invented "Deathcore" or the idea to mix real hardcore with Death Metal. One could say that in NYC maybe Sheer Terror may have done that accidentally as early as 1985 on their first demo. But by 1991 our initial HC heroes were dropping like flies and Confusion had become pretty obsessed with bands like Obituary, Morbid Angel, Malevolent Creation, Entombed, Death, and Deicide. So much so that NYHC was no longer a part of our sound, but only in our roots and attitude. We were a metal band completely by 1992, hardly even playing the songs on our 1990 or 1991 demos. We wanted to be the most "brutal" band in Brooklyn and we eventually did just that I would say.

In the spring of 1992 we recorded our first and only 7" EP called "Taste of Hate", for the French label Hardway Records. How the owner Stephan (Kickback) found a small band from Brooklyn? Tape trading..ah the lost art! The cover art hand drawn by our friend John from Patterns, who went on to become Candiria's guitarist many years later. Candiria was around back then too, but they were a satanic Death Metal band that didn't even play with hardcore bands until after Confusion called it a day. The record finally came out in the early fall of 1992. Only 1,000 were pressed and it didn't even sell all that great initially since the band didn't tour and "distros" hardly existed. But eventually they all sold and it was never re-pressed to this day. As opposed to the demo songs, the songs were longer and had a Death/Thrash vibe mixed along with it's Hardcore parts for sure.

Confusion played both Hardcore and Metal shows, but by 1993/1994 the Metalheads were embracing us much more due to how heavy we had become. We were quite popular in the states of Maryland, Pennsylvania, and New Jersey due to the fact that outside of the five boroughs of NYC, those were the only places we played. The best Hardcore shows for Confusion were the out of state shows and those that we played with our friends' bands in Brooklyn or NYC. But the biggest shows as far as attendance goes were Death Metal shows. We played with Cannibal Corpse, Disincarnate, Cancer, Unleashed, Incantation, and countless others. I remember one show in 1993 with Deicide, Dismember, and Vader in front of 600 kids in our hometown of Brooklyn at the defunct club L'amour. Glen Benton told us how much he liked us and the Hoffman brothers smoked weed with my singer and guitarist.

Confusion as a band didn't really get along all that well sometimes. We fought a lot and there was even a time when I was kicked out of the band for like two weeks! Our lead singer Mike was going off to college in Florida and in the summer of 1994 we decided that we would end the band at the end of the year. Our last show was in December at L'amour with the mighty Deicide, and it was a good one. In 4 years time we did 2 demos and a 7" and played a ton of shows. My biggest regret was not ever recording our best material though - the songs that make up the brunt of the infamous City Gardens show in 1993 like "Half Dead", "Gasping For Air", "Seeds of Greed" and later on a sick song called "The Fire Burns All". These songs are very Death Metal, but have mosh parts, no real guitar solos, and are kinda short, thus in my opinion what "Deathcore" should sound like.

In the summer of 2002, original Confusion guitarist and founding member Frank Collins was killed in a motorcycle accident in Brooklyn. Although Frank was kicked out of the band in late 1992, we were all still friendly and were shocked by his death. A benefit to raise money for his mother was organized by Rich from Darkside NYC and myself and was held in January 2003 at CBGB's.

Confusion reformed for the night and played one more time in honor of Frank. It was a sold out show that also reunited Darkside NYC, our "Deathcore" brothers. The lineup also included All Out War, Next Step Up, Shutdown, Bulldoze, Subzero, Kickback, Most Precious Blood, Inhuman, and many more. It was Confusion's first time on stage in nine years and it was a lot of fun, but there was no talk of an actual reformation.

Confusion decided to start jamming again in the summer of 2007 and managed to play 2 shows and a small amount of t-shirts were made. One show was in Kearney, NJ with DARKSIDE NYC and ALL OUT WAR and one in Peekskill NY, a festival with a ton of bands including DARKSIDE NYC, INHUMAN and many more. Our next show of that year was supposed to be the memorial show for our friend Javier "SOB" Carpio of MERAUDER, but the Confusion curse struck and we did not end up playing.

I have to say, there were a lot of fights at our shows in the 90's and at the shows we were attending at that time.

Brooklyn was pretty crazy, the NYC shows at the time were really crazy and so were our fans and friends...just plain crazy and angry! There was this vibe back then where you really did not know what was going to happen at a show and looking back, it was fucked up a lot of the time. But, I wouldn't trade those days for anything and I have many friends I made from that era that are a part of my life today. You experience good and bad together and you grow up together. So "hello" and "cheers" to everyone from back then who is able to read this and smile or remember this shit fondly.
As I type this it is late November 2011 and after a lot of personal back and forth, I decided to put all of the CONFUSION stuff here on Blogged & Quartered for FREE as a gift to the fans and friends. In the scope of things, Confusion was a small band, but for some reason or other, I get asked and emailed about the band and it sometimes blows my mind. The early 90's were an odd time for Hardcore. Confusion got heavier and heavier, eventually having very little "Core" in our sound, but we were Hardcore kids in our attitude and background for sure.

I want to say thank you to Vinny of B&Q and thank you to all who care.
I hope you enjoy the music and I am looking forward to the comments section!