1987 was the year i got into hardcore. The amount of stuff coming out of the East Coast at the time, especially out of NY and NJ, was overwhelming. Dozens of classic demos, records, and other recordings just flooded the scene between 1987-1989. For me it was like discovering a new world. The 3 demos from the Jersey scene that stand out the most of me would be the Turning Point demo, the Release demo (both would go on to continue recording into the early '90s), and the classic Enuf demo. Half a dozen recorded songs, a handful of shows, and then they were gone. 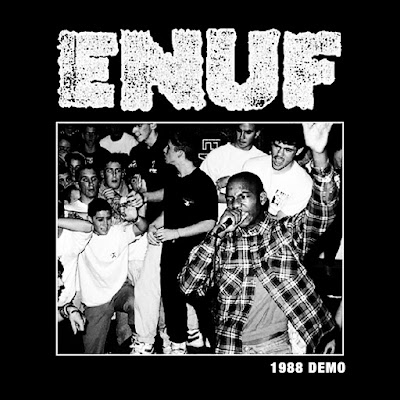 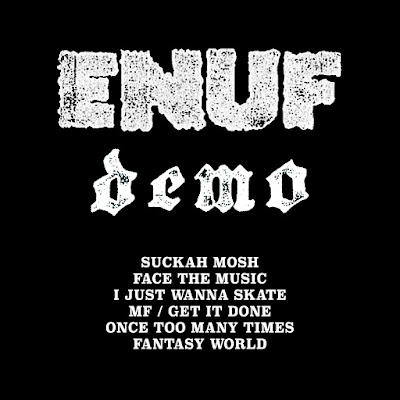 So here is is. Fully restored. Songs that still sound great after 25 years. Enjoy!

After the demo was recorded, Chip Laturo joined to play 2nd guitar. When Pete left the band, Chip stayed on as the guitarist and Andy moved on to bass duties. The band split up in 1989. Sucks they never recorded more material during the years they played together.

Ari Katz also played drums in Up Front, Courage and Lifetime, just to name a few.

Pete Sanchez was kind enough to write to me and share some info on the demo, his time in the band, and some of his favorite shows with Enuf:

The demo was recorded to my recollection in August/September 1988 at Trax East in South River. The studio was brand new and it was my impression we were one of the first Hardcore bands to record there but I could be wrong. It was also down the street from Andy's house.

When I was in the band there were a couple songs we just stopped playing as they were not that great we probably played some of them at our first couple shows.. After my time I have no idea.

My favorite shows was the first and my last. Our first show was in March of 1988 at Middlesex County College in Edison NJ and we played with Vision and P.E.D. I recall being both nervous and excited and remember drinking a lot of Jolt that night. It was a pretty good debut as I recall. My last show was at Scott Hall at Rutgers in New Brunswick and we played with Vision and Bold. I thought that was by far our best show to date.

As I went back to school full time and then law school, I never really had the time to devote to any band. As for the other guys I am not sure whether the played in any other bands as I have not spoken to them in a long time. But it was a great experience and I am just surprised that anyone even remembers the band never mind the demo.

For interviews, pictures and other info on the band, check out the always amazing Double Cross site and do a search for Enuf.

The image used for the cover in this post (photo by Ken Salerno) is not the actual demo cover, which i couldn't get a quality scan of unfortunately.
Posted by Stormy at 11:34 AM 13 comments: