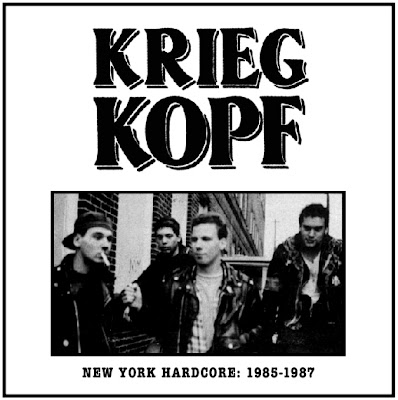 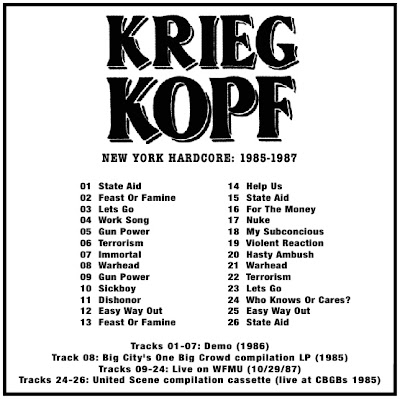 I got a cassette copy of the Krieg Kopf demo back in the the late '80s during the old tape trading days. I always considered this an underrated ripper. At their best they seemed to fuse the early, more straight forward NYHC sounds of bands like Antidote and Cause For Alarm with the more rockin' sounds of NY punk bands like Kraut and Reagan Youth. Krief Kopf formed in 1984, and were a very short lived band, with not much recorded output. I wish they would have stuck it out a bit longer. They kicked ass, plain and simple. Enjoy!

The demo was recorded in 1986 at Granit Records in Babylon, LI. Great production on this tape, and great songs as well. The opening track, State Aid, was always a fave of mine. The last track, Immortal, stands out as it sounds completely different that the rest of the demo. It has a much darker feel, and an obvious So-Cal punk influence. It wouldn't sound out of place on one of the Hell Comes To Your House comps.

Warhead appeared on the One Big City compilation LP on Big City Records in 1985. It's a pretty by-the-numbers hardcore song, but i love shit like this. The One Big Crowd LP is a classic East Coast comp. Side A featuring all NY bands, and side B featuring all NJ/Connecticut bands. The comp came with a 26 page booklet full of lyrics and info. My fave bands on here being Bedlam, Chronic Disorder, Ultra Violence and the only known recording by Shock (song is a monster). I held on to my copy after all these years.

The WFMU set is the real treat here. A whopping 16 song set recorded on 10/29/87 on Pat Duncan's radio show. I wish i had a better quality rip of this, but it's worth hearing for sure. Aside from the demo tracks, they play the majority of the songs that were supposed to be put out as a full length LP for 109 Records (which was recorded but never released). Seems like they were going for more TSOL or Adolescents territory on some of these newer tracks, not unlike the last track on the demo. Maybe it's just me, but i also hear a huge Artificial Peace vibe in a lot of these songs, in both the songwriting and just the overall sound. Fine by me. Whatever the case, it's killer stuff, and hopefully the LP sees the light of day at some point. There was talk a few years back on the band's web page of the long lost album finally being released. Apparently it was recorded some time between 1986-1988. It's been a while though, so that may have fallen apart unfortunately. We'll see.

The band went through a few singers (including Perry from Clenched Fist) before finally calling it a day at the end of the '80s. They played a reunion show at A7 on 12/06/08.

If anyone has any info on the unreleased LP, or any band pics, stories, demos/live recordings etc. Please leave a comment or get in touch.
Posted by Stormy at 5:05 PM 8 comments:

I really miss those old ABC No Rio days. On most Saturdays back in the early '90s, a couple of friends and myself would take the bus fron NJ to NYC and walk to Rivington Street. Most times we didn't even bother to find out who was playing. Five bucks got you a handful of hardcore / punk bands playing in the basement, an amazing record distro on the main floor, and a place to hang out in the courtyard between bands (and sometimes have eggs thrown at you from the surrounding apartments). It was basically a place to hang out all day, and back then Saturday couldn't come quick enough. For the most part the shows were always great. A solid mix of the local "ABC bands" and the out of towners. I got to see some amazing shows back then, including Jawbreaker, Assuck, Born Against, Chisel, Rorschach, GO!, Merel, Crudos etc. And one of the bands i was lucky enough to see was Huasipungo. Their shows were serious and funny at the same time, and they had so much energy. They were just really into what they were doing. A great live band.

Huasipungo is a political, Latino hardcore band that started in NYC in 1991. During the '90s i think they were kinda overshadowed by the more popluar Los Crudos (also Latino and extremely political), but to me they were every bit as good. I prefer Huasipungo actually, and think more people should be exposed to them. So for this post i've included pretty much everything the band has ever recorded, including the rare first demo, live WFMU set, and earliest comp tracks. Enjoy! 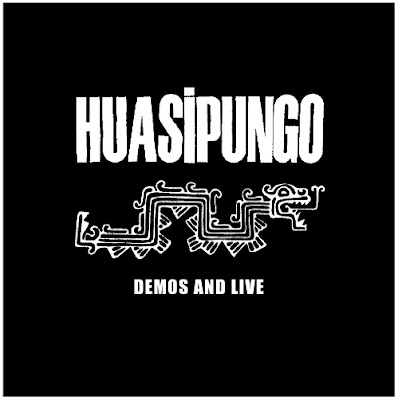 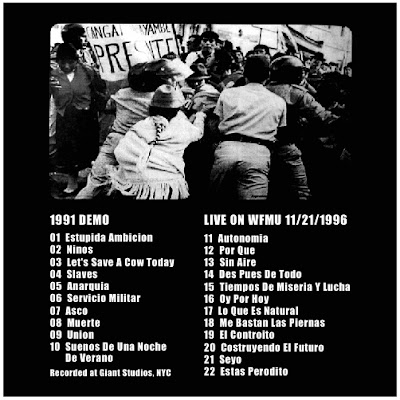 The demo was recorded at Giant Studios in 1991. Raw recordings of songs that would later be re-recorded for their first 7" and various compilations. The live set was recorded at the WFMU Studios for Pat Duncan's radio show on 11/21/1996. Thanks Arty! 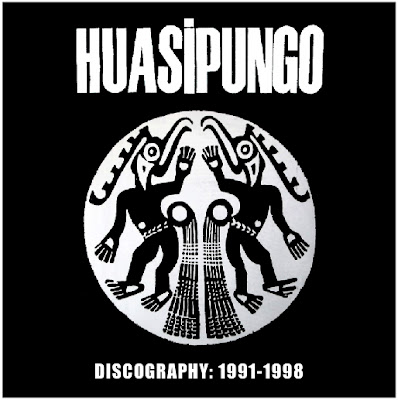 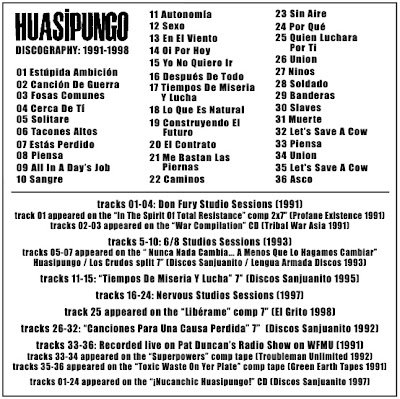 The first 4 tracks were recorded at Don Fury Studios in 1991. The first song, Estúpida Ambición (Stupid Ambition), a re-recording of a demo track, was on the In the Spirit of Total Resistance 2x7" compilation released by Profane Existence in 1991. The comp was a benefit for the Mohawk Nation of Kanesatake and came with a 64-page booklet. Other bands on the comp included Jonestown, Los Crudos, Man is the Bastard, Pollution Circus, One By One and Dogfight. Stupid Ambition also appeard on the long lost Fuck Rock: ABC No Rio 1991 comp that finally came out in 2010 thanks to Freddy Alva's rejuvinated Wardance Records. The next 2 tracks, Canción De Guerra (War Song) and Fosas Comunes (Mass Graves) were released on the War Compilation put out by Tribal War Asia in 1991. This was a great comp that included some ABC bands like Rorschach, Merel, Hell No, Bugout Society and Warning, along with a bunch of foreign bands. The final Don Fury session track was unreleased as far as i know, until the ¡Nucanchic Huasipungo! CD in 1997.

Tracks 5-10 were recorded at 6/8 Studios in 1993. These are my favorite Huasipungo tracks. There's a much heavier sound on these recordings, and the vocals are monstrous. The first three tracks from these sessions appeared on the split 7" with Los Crudos released in 1993 on Discos Sanjuanito / Lengua Armada Discos. I consider this a classic hardcore record of the '90s. The remaining three tracks from these sessions were unreleased until 1997. Of these my fave is the massive Piensa.

Tracks 11-15 were also recorded at 6/8 Studios. These songs were released as the Tiempos de Miseria y Lucha 7″ in 1995 on Discos Sanjuanito Records.

Tracks 16-24 were recorded at Nervous Studios in 1997 and released on the ¡Nucanchic Huasipungo! CD in 1997 by Discos Sanjuanito. This is a great batch of songs. Really catchy stuff. An earlier version of the song Caminos was released on the Sick But Slick compilation put out by Nawpost Records in 1992. That version is not included here unfortunately, as it was the only song i couldn't get a hold of.

Tracks 26-32 are from the band's debut 7", Canciones Para Una Causa Perdida. Released in 1992 on Discos Sanjuanito Records. Recorded at Giant Studios, the same studio they recorded their demo shortly before. This record is pure chaos. Frantic, crazed hardcore that always sounds like it's on the verge of falling apart into complete cacophony. Influenced by bands like Larm and Napalm Death, as well as '80s Spanish hardcore punk bands, it sounds like no other record to come out of NYC. I love this stuff.

Tracks 33-36 were recorded live on WFMU in 1991. The first two tracks appeared on the Superpowers cassette compilation on Troubleman Unlimited in 1992. The second two tracks were used on the Toxic Waste On Yer Plate comp cassette on Green Earth Tapes in 1991.

All vinyl and cassette tracks cleaned as best as possible. CD versions used for all available. Everything ripped at 320.

Huasipungo are still playing shows (most likely with a new lineup aside from Esneider), and are still involved with ABC No Rio. Check out their website here. 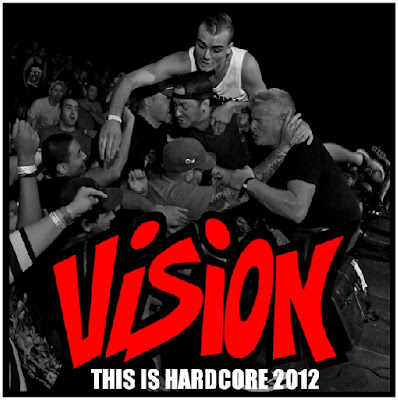 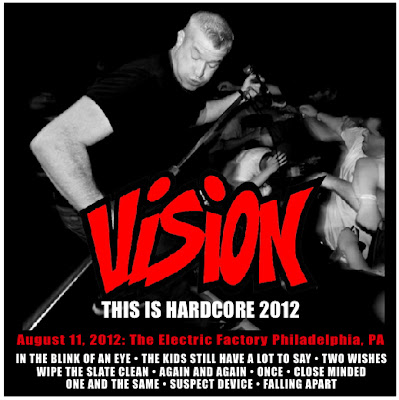 It's rare that i'll post newer live shows, but this set from Vision sounds so incredible i just had to include it. This was recorded at the This Is Hardcore Fest on Saturday, August 11th at The Electric Factory, 421 North 7th Street in Philadelphia, PA. Great energetic and tight performance, and an excellent soundboard quality recording. Enjoy!

Thanks to Dan from the Old, Fast & Loud blog for sending me this! 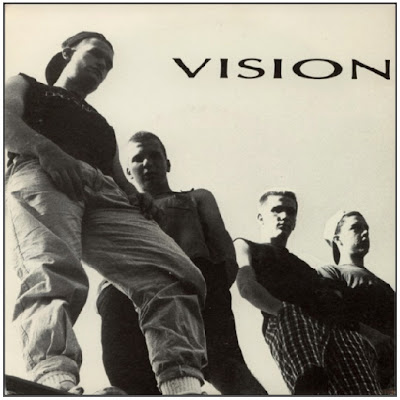 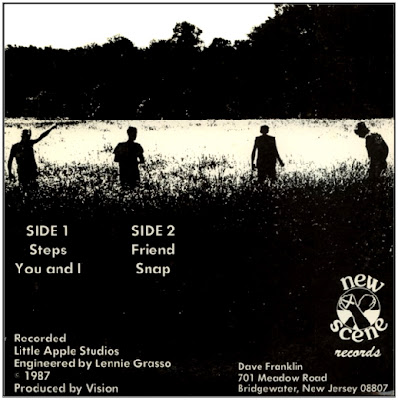 Thanks to Jmarc from the great Pay No More Than blog i was finally able to get a quality sounding rip of the first Vision ep from 1987. Four killer songs that are not on any other releases. Classic stuff.
Vision 1987

The Vision 7" was recorded at Little Apple Studios and released on New Scene Records in 1987. 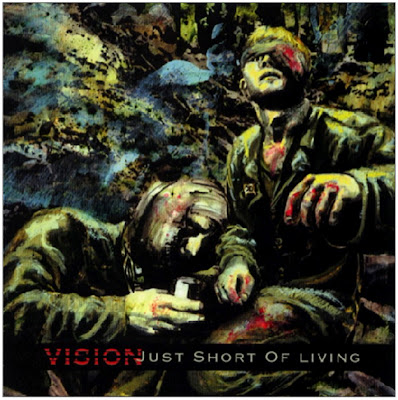 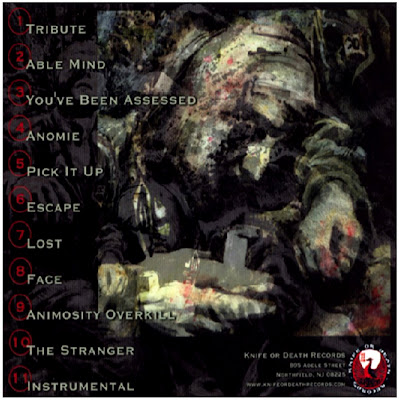 Vision's second full length, Just Short of Living, was released in 1992 on Criminal Records. It was remastered and re-released on March 9, 2004 on Knife Or Death Records, along with the 4 tracks from the 1987 ep, which, unfortunately, skipped like crazy. Just Short of Living was a huge departure from the band's previous material. It's a grower though, although the new metallic sound and vocal delivery takes some getting used to i would imagine.