One of my goals when i first started this blog was to include collections of rare music by all the bands on the New Breed compilation cassette. With the help of Freddy Alva and a few other people from various message boards i was able to upload music from 14 of the 20 bands on the comp so far. Absolution, Life's Blood, Outburst, Our Gang, Collapse, Pressure Release, Breakdown, True Colors, Show Of Force, Abomb A Nation, Uppercut, Fit Of Anger, Bad Trip, Under Pressure... and now Raw Deal, bringing us up to a solid 15. The remaining bands (aside from maybe Beyond), may be a bit of an effort. If anyone can help out in any way, please get in touch. I'll be re-doing the Absolution collection soon, as a double CD with a better sounding rip of the demo and some live sets.

As usual, my exposure to Raw Deal was listening to songs from the first demo on Pat Duncan's radio show on WFMU. Pretty sure it was '88. I was able to buy a copy of the demo a year or so later at Bleeker Bob's record store in NYC. What can i say about it? It's a classic NYHC demo in the same way the Breakdown '87 demo or The Altercation demo are classics. If you're into the mid to late '80s NY hardcore sound, it's essential. Listening to it now, it's still great and hasn't lost any of it's power. It brings back memories of sitting in a cemetery in NJ with my friends and jamming Only The Strong Survive on my little boombox. I got to see Raw Deal play live once in NY. Can't remember that far back but it was either at L'Amour or The Ritz. Pretty sure it was (if not one of) the first shows they played under the name Killing Time. I went with an old friend of mine who wanted to see some crossover band. I may have been Nuclear Assault? Anyway the flyer said Killing Time was opening. I had no idea who they were, and still had no idea after they came out and played their first song. The next song was Wall Of Hate, and i remember saying "Holy shit, this is Raw Deal!" Then the singer said something like "We used to be called Raw Deal and now we're Killing Time", and they proceeded to tear the place apart. I was blown away when they played Backtrack, as i had just gotten a copy of the NYHC: Where The Wild Things Are comp a few months earlier and played it endlessly. It's still one of my favorite comps ever. Music that brings back great memories. I picked up a copy of the Killing Time "Brightside" LP sometime in the early '90s while going to art school, but it didn't really click for me the way the demo and comp tracks did. I guess i was so used to the original versions of the songs. Of course it grew on me over the years.

I only heard the second demo maybe less than 10 years ago. It was a shitty sounding copy, but it was great to hear songs i'd never heard from the band. Recently i got really nice sounding rips of both demos (thanks Burning Fight from Livewire), which made me decide to make this post. I found an old live '88 set from CBGB and cleaned it up best as possible, tacked on the New Breed tracks and a massive sounding rehearsal of Backtrack, and here's the result. Enjoy. And don't forget to grab the easter eggs throughout the post. Some really good ones in here. 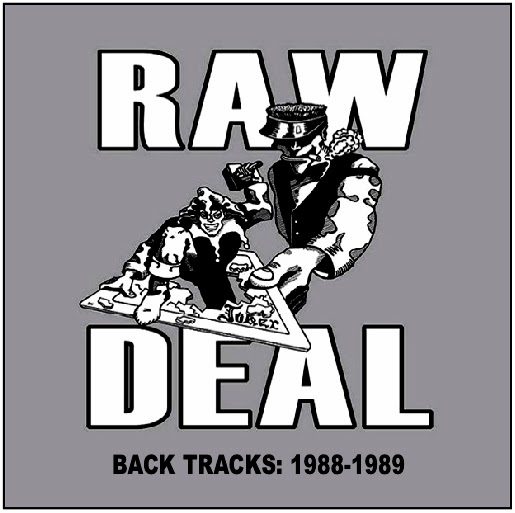 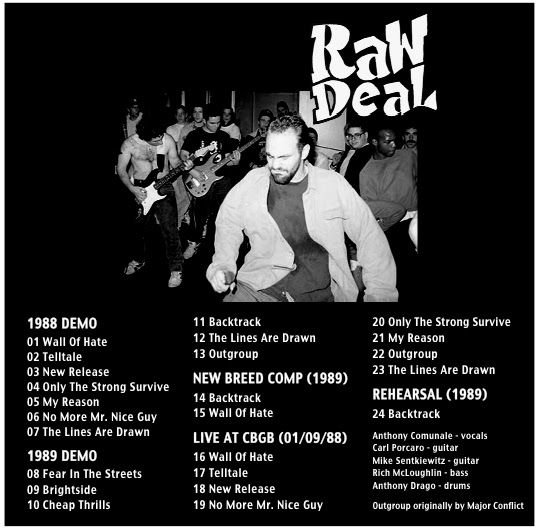 Raw Deal formed in 1988, founded by Carl Porcaro, Rich McLoughlin, and Anthony Drago, all formerly of classic NYHC band Breakdown. Anthony Comunale from Token Entry joined for vocals and Mike "Hellfire" Sentkiewitz from Sick Of It All on guitar. Both Mike and Carl played guitar on the 1988 demo. The New Breed tracks list the lineup as Anthony, Carl, Rich and Drago. The NYHC: Where The Wild Things Are comp reads the lineup the same way, citing Mike Sentkiewitz as partly composing the music. Both comps were released in 1989.

The first demo was recorded in the summer of 1988 at The Loft Recording Studio in Bronxville, NY. The self-released demo tape came with a lyric insert, It was released as a 7" on Dead Serious Records out of Germany in 2005 on red vinyl, and reissued in 2006 on white vinyl.

The live set was recorded on January 9, 1988 at CBGB in NYC. They play the entire first demo and a Major Conflict cover (Outgroup). There's another live CBGB set floating around the net from April 17, 1988. It's a longer set with tracks from the second demo, but unfortunately the sound quality is extremely poor.

Killing Time continued on, and the last recording i know about is the Three Steps Back LP from 2010. I've heard they're releasing new material soon.