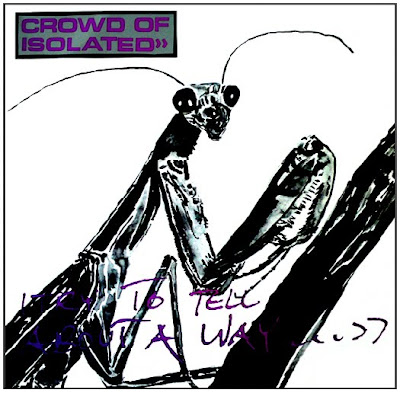 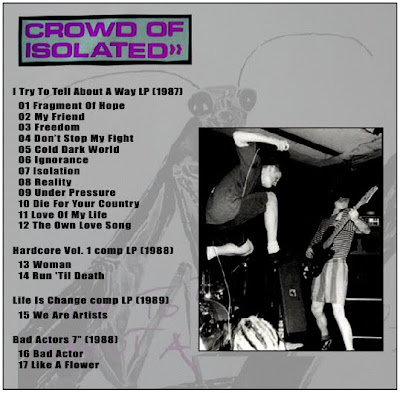 I Try To Tell About A Way is my single favorite hardcore album to come out of Germany. I first heard the band sometime in the late '80s on Pat Duncan's radio show on WFMU in NJ. Crowd Of Isolated seemed to be on the playlist just about every Thursday night for at least a year. From the radio show i taped a few songs which i listened to constantly. My favorite track was Don't Stop My Fight, which made it's way onto just about every mixed tape i made during that time. I still can't help but sing along every time i hear it. That track just struck a chord with me and i couldn't go a day without listening to it. A few years later i was able to get a copy of the album through some German mail-order. Eventually i came to appreciate the album as a whole, and it became one of my favorite hardcore albums on the late '80s.

Until recently i was not at all familiar with German hardcore/crossover and at the time Crowd Of Isolated sounded like no other hardcore band i'd ever heard. They had a definite Iron Maiden vibe in just about every aspect of their music, yet it still remained very much hardcore punk. It was crossover, but not in the usual way. The vocals were like a combo of Bruce Dickinson and Elmer Fudd, and once in a while a little Rozz Williams would creep into the mix. Although that may not sound good on paper (or a computer screen in this case), it worked. The music was a mix of melodic, catchy metal riffs, hardcore, and even maybe a touch of emo at times, for lack of a better term. Favorite tracks other than the amazing Don't Stop My Fight would be Under Pressure, Cold Dark World and Love Of My Life, but the album is perfect from start to finish. Absolutely essential.

The rips of the lp, ep, and comp tracks here are excellent. Absolutely no surface noise or pops. All 17 tracks are as close to CD quality as you will ever find. Enjoy!

The I Try To Tell About A Way LP was released on X-Mist Records in 1987, on both black and white vinyl. It was recorded at Kong Studio in Reutlingen in November of '87. The LP came with a foldout lyric sheet. It was mastered by G. Pauler at Pauler Acoustics. Produced by Armin Hofmann. Great cover art by Jaenette. Never repressed as far as I know, and never released on CD.

The Hardcore Vol. 1 comp LP was released on Starving Missile Records in 1988 as a limited edition of 1,000 copies. Produced by Mike Just. Cover design (which reminds me a lot of Richard Kern's photography) by Pyhacore. Bands on the comp: Artless, EA80, Aidscats, K.G.B., Crowd Of Isolated, Boskops and Dream Police. The 2 C.O.I. tracks on this comp sound like they were from the LP sessions, as the recording is closer to the sound on the album than on the Bad Actors ep which followed.

The Life Is Change comp LP was released on Beri Beri Records in 1989. It included a 12 page booklet about the bands: EA80, The Vernon Walters, Magnetic AD, Crowd Of Isolated, H.D.Q., Putten, Billy And The Willies, Karma Sutra, The Plot and The Ex.

Other comps C.O.I. appeared on:

If anyone has any of these tracks and can share them, please get in touch.

Crowd Of Isolated on Myspace.
Posted by Stormy at 9:49 AM 20 comments: