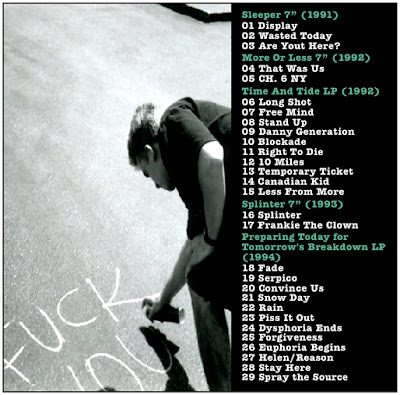 Sleeper were a melodic punk hardcore band from Staten Island, NY who recorded a bunch of great material between 1991-1994 before changing their name to Serpico (turns out there was a band named Sleeper from England who paid the NY band to change their name).

Sleeper played a great mix of '80s DC style punk, most notably Dag Nasty and Fugazi, mixed with pop punk (think early Shredder or No Idea Records), and hardcore. Ever since i heard the band back in the early '90s, i've associated them with that first wave of '90s emo that seemed to be exploding at the time. The first Sleeper song i heard was 10 Miles from their first release in '91, a split 7" with Gutwrench (who shared members with Sleeper). I never owned that record, and recorded the song from Pat Duncan's show on WFMU. Unfortunately the original version of 10 Miles is the only track from the bands early output not included here (although an alternate version is on the band's debut LP). I also recorded the song Display from the band's first 7" (still my fave song from the band). Both songs were on constant rotation back then, and it wasn't until a couple of years later that i was able to score a copy of the band's first LP. I loved this stuff back then, and even though the band obviously wore their influences on their sleeves, nobody else really sounded like Sleeper. I recently re-discovered the band and have been playing it quite a bit, along with some Serpico material. So here's a collection of Sleeper material recorded between 1991-1994. Pretty much everything they recorded under that name, aside from the track from the Gutwrench split, and maybe a random comp track or two. Thanks to David Michaels, Matschy, John, TJ and everyone else over at the Daghouse Board. All ripped from CD sources at 320kbps. All tracks adjusted to the same volume. Enjoy!

Lots of great easter eggs in this one. Anything that is a clickable link (a letter, word or even a punctuation mark) leads to a download. Some related to this post, and some not. Don't miss out.

Sleeper started out as Ratcatcher in the late '80s.They existed with that name from 1988-89. In that time thay released a 5-song cassette recorded live at CBGB called We Rock, You Don't, and a full length unreleased album called Smell The Glover. The LP was recorded at Water Records in Hoboken, NJ sometime during 1988. Ratcatcher was a bit more straight forward pop-punk than Sleeper/Serpico, and maybe a bit less serious sounding, for a lack of a better way to put it. Apparently there was a Ratcatcher reunion show in July of 2011.

Here's the pre-Sleeper Ratcatcher unreleased LP. This is a 192kbps rip, straight from the master tapes. Thanks again to the members for sharing this. NOTE: The image posted is not the actual cover art for the LP (i'm not even sure if there was a cover). I made this myself just because i like doing shit like this, and wanted a makeshift cover to house my CDR. Enjoy! 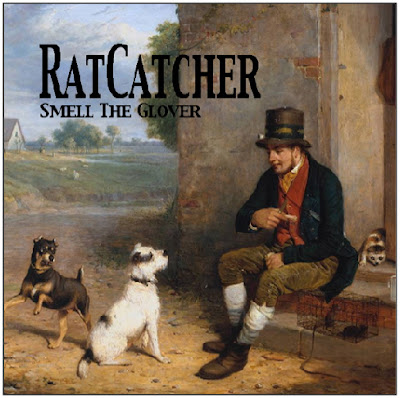 The first Sleeper release was the Sleeper/Gutwrench split 7", released on Excursion Records in 1991. The short-lived Gutwrench played metallic hardcore fused with melodic punk. Besides the Sleeper split in '91, Gutwrench released one 7" called New Block On The Kids in 1990 on Tragic Life Records. They also covered the classic Zero Boys song Civilization Dying for the compilation If It's Too Loud.. You're An Asshole in 1990,

Gutwrench featured John Lisa and Marc Treboschi from Sleeper (as well as Billy Hamill, Al Gritz and Lou Dimmick who played bass on the band's 1991 7").

The Sleeper s/t 7", known as the Display 7", was released on Tragic Life Records in 1991. Recorded at Persia Studios in Staten Island, NY in '91 (on pink and black vinyl), and reissued in '92 on transparent yellow. Three killer songs, and along with the first LP, my favorite Sleeper material. This is the only record to feature Lou Dimmick of Our Gang on bass. These tracks were ripped from the Weakest Boy In The Troop Award comp CD on Excursion Records.

Next up was the More Or Less 7" released on Mugglewump Records out of Switzerland in 1992. This 7" included a studio side and a live side. The studio side was recorded and mixed by Marc Teeboschi and Sal Cannestra in April of '92 in Staten Island. The live side was recorded by Dave Parasite and Pat Duncan at WFMU studio in East Orange, NJ. Great cover by the great cartoonist Daniel Clowes. 1,000 printed on recycled paper. Included in this collection are the two studio tracks only.

The Time And Tide LP was recorded in April of '92 at a 16-track studio in downtown Staten Island, and released on 42 Records out of Germany later that year. This is a ripper of an album. A bit more on the hardcore side than the previous 7"s, but still has that catchy pop edge. Nice thick sound due to the addition of second guitarist Sal Cannestra (formerly of Ratcatcher). Only Sleeper release to feature drums by Alex Gritz. First song is my fave.

The Splinter 7" was released on Allied Recordings in 1993. Recorded and mixed in October/November 1993 at Bippy's Chaotic Kitchen in Staten Island (TJ Quatrone's mothers house). The version here was ripped from the Making Of Allied One Two Three comp CD. On this recording Sal is replaced by Michael De Lorenzo on guitar.

The Preparing Today For Tomorrow's Breakdown LP was recorded from December 29th through January 4th at Bippy's Happy Kitchen by Bill Stevenson (Black Flag/Descendents) and Stephen Egerton and released on Excursion Records in 1994. The CD version, released the same year, also included the Time And Tide LP and the two studio tracks from the More Or Less 7". I like the album, although it's my least favorite of all the Sleeper releases. This is also the release not to include the vocals of John Telenko. John Lisa takes over lead vox on this album. Telenko would return shortly after to record several records when the band changed their name to Serpico.

During Sleeper's existence, the also recorded many songs for various compilations. The song Free Mind (from the Time And Tide LP) appeared on the Emergency Broadcast Systems Vol. 1 comp 7" on Allied Recordings in 1992. The somg Forgiveness (from the Preparing Today For Tomorrow's Breakdown LP) appeared on the Music For The Proletariat comp CD on Allied in '93. That's the infamous comp which first featured Jawbreaker's Kiss The Bottle. The song Destroy The Builder (a Ratcatcher song) appeared on the Viva La Vinyl comp LP released on Dead Beat Records in 1994. The same track wound up on the Break The Distrust comp 7" on World Upside Down Records in 1995.

The band continued under the name Serpico until the late '90s, releasing two full lengths, three 7"s, and three split 7"s. They were especially active in 1995-1996. I suggest the They Shoot Babies Don't They 7" (my fave Serpico record by far) and the Rumble LP. It's all good though.

You can download some great Sleeper/Serpico stuff on this page on the Daghouse board, including a great set recorded live on WFMU. I'm not sure of the year, but it's mostly material from the Rumble LP, so i'm guesing it's from '96. You can also check out a great interview with John Lisa here.
Posted by Stormy at 8:32 PM 17 comments: