Here's a real hardcore rarity, to the point of mythology. The Sid Sludge Studio Band "Hardcore Caesar" cassette from 1984 (i believe).

This has been my 'holy grail' of HC recordings for over 20 years. I never thought i'd ever get to own it, or even hear it. Recently, a great guy by the name of Tohm from New Jersey sent me a rip of the HC Caesar cassette. Needless to say i was super excited and even thrown for a loop. Tohm did a great job of ripping this. It sounds great, especially considering the source is a well-played cassette from '84. Nice loud, full sound, no loud surface noise or dropouts... just some slight static here and there on a couple tracks.

I put together the CD covers using images from a Mental Abuse site as well as actual cassette cover, which i included as a high res scan towards the bottom of the post. 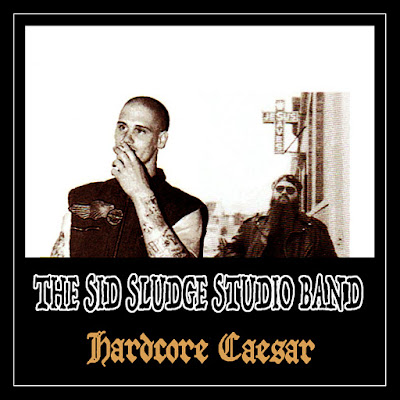 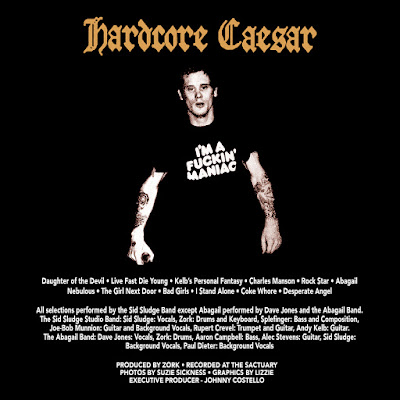 As for the music (don't expect any hardcore going in), it mostly sounds like a rock n roll version of Mental Abuse. It's an odd tape for sure, but i think it rules. When the first track kicks in you'd think you were hearing Sid sing for a bar band. The next track has a country western feel, and after that Sid even does a short rap over a Miles Davis loop (I'm Sid Sludge and i came here to rap ap ap ap...), the weirdness just goes from there, and there's an instrumental that's pretty much just a jazz style drum solo. Sid sings on all but one track, which is an entirely different band actually called The Abagail Band, fronted by Dave Jones of Mental Abuse. It's just slipped into the middle of the tape, which just adds to the oddity of the whole thing, and since it's just one track i definitely wouldn't consider this a split. Andy Kelb (who played on Streets of Filth) plays on all the Sid Sludge Band Studio tracks, eleven in all.

Sorry i don't have any more info on this. I remember a while back there was a short film on Youtube with Sid Sludge as a mob guy. I'm pretty sure it was called Hardcore Caesar but i'm not 100% positive. Seems it's gone now, or i just can't find it. Anyway, if anyone knows where i can see this again please let me know.

Only 6 Easter Eggs this time. Two of these downloads are kinda common, but these are loaded with bonus tracks. A much bigger post is in the work. Until then...