The first time i heard anything Warzone-related was on Pat Duncan's radio show in early 1987. It was a live version of the song "Skinhead Youth" by the band of the same name. I searched like crazy for any demos by Skinhead Youth, but of course that's pretty rare to come by, even then. I had only recently discovered hardcore/punk music at that time, and had zero knowledge of Warzone, Raybeez, Agnostic Front etc. The only HC records i owned were the first Suicidal LP and DRI's "Dealing With It". Some weeks later a friend took me to a record store in Dover, NJ where i bought the first Warzone album (thinking the track "Skinhead Youth" was a cover song actually). The Warzone LP instantly became a favorite, and was pretty much my introduction to NYHC (along with the SFA "NY" '87 demo). But the Warzone record was something different entirely. Hearing "Don't Forget the Struggle...", and then later hearing recordings like "Victim in Pain", the Cro-Mags and Breakdown demos etc... they just sounded like New York City. Street hardcore. The same way a band like Adolescents sounded like beach hardcore.

I think one of the keys (to me) to a great hardcore band, is the ability to vividly remember first hearing them, and i remember spinning that Warzone LP like it was last week. The back cover and insert images of the band threw me for a loop. And then of course the album intro "Yo, wus up wit dat, less start jammin'! I was half-way expecting another Licensed To Ill. Instead, of course, i got 12 incredible hardcore songs that still stand up 25 years later. 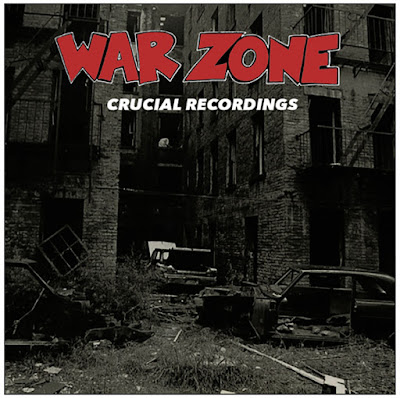 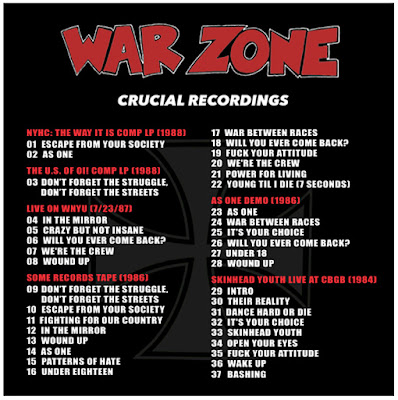 This is a collection of demos, comp tracks and other rarities spanning 1984-1988 with far superior sound quality than the collection i posted years back.

The first 2 tracks are from the classic New York City Hardcore: The Way It Is comp LP, released in 1988 on Revelation. The NYHC scene kind of exploded between 1986 and 1988, and this was one of the first documents showing that the scene in NYC was finally catching up with the rest of the US. Better late than never. Great and diverse (Bold followed by Nausea!!) comp that barely scratches the surface as to what was going on at that time. 320 rip from CD version.

The US Of Oi! comp LP was also released in '88, and features a completely different version of Don't Forget the Struggle... I prefer the original, but it's always great to hear alternate takes on classics. Some killer tracks by YDL and Anti-Heroes on the comp as well. 320 rip from CD version.

The WNYU tracks were recorded on July 23, 1987. These versions were taken from the New York City: Those Were the Days Vol. II compilation CD put out by Chaotic Records. This is not the entire session unfortunately (pretty sure 2 tracks were cut for the CD), but it's the best sounding source i've ever heard of these recordings. The CD also has tracks by Nihilistics, Token Entry, Norman Bates and the Showerheads (great band), and Krakdown, all recorded live on WNYU between 1987 and 1990.

Next up is the meat of the comp. The Some Records tape. Fourteen tracks recorded in 1986, including many that weren't properly recorded until years later and a ripping 7 Seconds cover that became a staple at Warzone shows. For me, these are the definitive versions of these songs. That raw a fuck guitar sound, and Raybeez' vocals never sounded better. Tracks from this session were released on the Lower East Side Crew 7" put out in 1987 as Rev. 1. The entire set was booted onto vinyl in 2008 as the "Street Kids Demo" along with the 1984 Tommy Rat demos. Not sure where i came across the rip here, but it sounds incredible. Best i've heard, and i must have had 5 or 6 versions of this over the years. Easily one of the best NYHC recordings of all time. "Don't forget the struggle, don't forget the street kids!!" 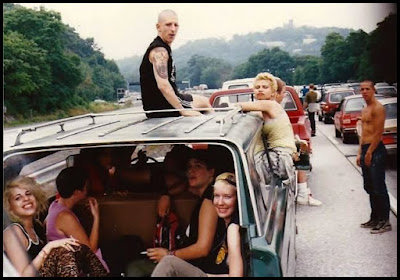 Raybeez with the Warzone Women

The heavily traded (back in the day) "As One" demo was distributed by Raybeez in response to the 7" selling so fast with many rabid fans still needing their fix. There were 50 copies of the original tape (slightly altered later) that were copied by Raybeez and given to Some Records to sell. Not sure which version is posted here, but there were 3 more tracks on tape, which were omitted here. "Don't Forget the Struggle...", which is the same version as on the Some Records tape, so that's already in this collection, and 2 live covers. Wire's "12XU" and of course 7 Seconds "Young Til I Die". On the rip i got the sound on the live tracks were beyond shitty. Unlistenable really. This is a great demo, and this has surprisingly great sound for a demo that has not been re-released in any was for the past 30 years. Thanks to Cooch for this one. There was also a Don Fury rehearsal tape recorded in '87 that was basically the Gorilla Biscuits lineup with Raybeez singing. Would love to hear that! Hopefully somebody properly documents all this essential stuff one day as there would be enough in the way of demos, rehearsals and live sets for a double LP or CD. I heard Revelation is planning on releasing old Warzone material, but judging by their output, it will most likely be the first 2 LPS and maybe the comp tracks. Maybe even a remastered (and castrated) version of the LES Crew ep? I doubt there will be anything to cream about, but hey, hopefully they prove me wrong. Thanks to Cooch for the rip, and for various info throughout this post.

Last up is the pre-Warzone incarnation, Skinhead Youth. Recorded live at CBGB during the infamous show in 1984. It's an incredible set, with many songs that would wind up on the first 2 Warzone LPs. Lots of banter between songs. Great sound, great set. One of my favorite live NYHC recordings. I have yet to find a decent sounding rip (or tape) of the Skinhead Youth demo. One of my top wants. 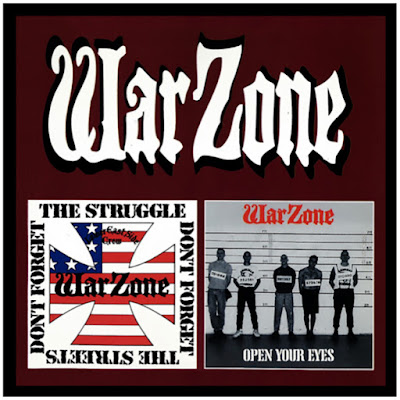 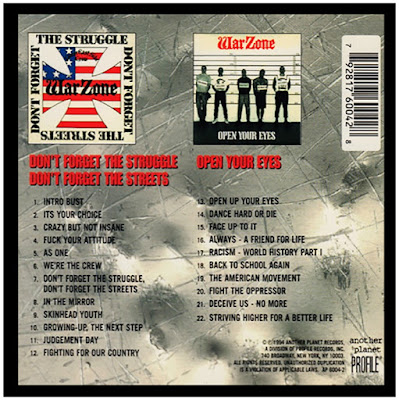 The "Don't Forget the Struggle, Don't Forget the Streets" LP was recorded in August 1987 at Studio X in Ridgewood, NJ. It was released on Fist Records in 1987. It was repressed in '88 on Fist/Caroline Records. Last (unofficial) pressing i know of was in 2012 on red vinyl, with lyric insert and stickers. I traded off my first press years ago, along with lots of other rare shit, which i now regret of course.

"Open Your Eyes" was recorded in August, 1988 at the Kampo Cultural Center in NYC and released on Caroline the same year. A great follow-up although a bit more mid-paced. My fave tracks are the 2 reworkings of early Skinhead Youth songs. Love the cover and band pics.

Both albums were released on one CD in 1994 on Another Planet Records when they were in their 'two NYHC albums on one disc' phase. I remember having CDs by Cro-Mags, Murphy's Law and Leeway many years back. Those are almost impossible to come by now. The same CD was then released by Lost & Found in various pressings between 1994 and 1997. The first pressing had an odd cover depicting two dogs attacking each other, and was later changed to the cover shown above. This is a 320 rip from Lost & Found CD. 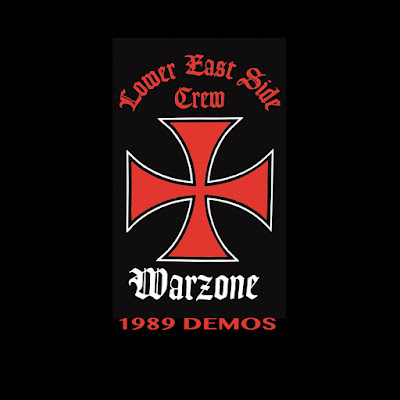 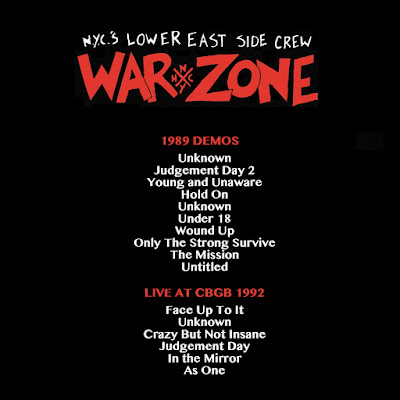 So now we get to 1989. Warzone releases one of the worst 'metal/rock album by a hardcore band' in the history of 'metal/rock albums by a hardcore band'. Seems like every scene in the '80s died when classic hardcore bands decided they had "chops" and all of a sudden wanted to be the next Van Halen. It happened in Boston, DC and California and of course NY would follow suit. Of course some pretty good albums came out of that whole mess. I love the Void LP for instance. It sound like exactly what it is - Void trying to play rock songs. How could that not be great? Same for the YDI album. But when the bands got it wrong... holy shit (ever hear Antidote's "Return to Burn" LP?). It was inevitable during the late '80s that metal would influence the NYHC scene. Let's just say Agnostic Front got it right and Warzone got it wrong. The Warzone s/t album was released (for some reason) on vinyl, cassette and CD in 1989 on Caroline Records, and i can only imagine the amount of jaws that hung open as this slab hit turntables in NYC. 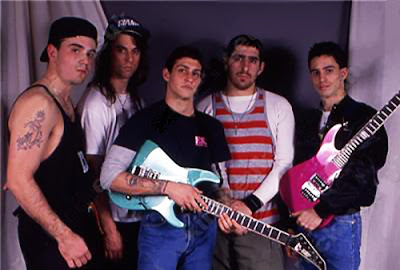 The demo for the album is a different story though. While not as great as any of the band's previous work, it's a pretty good hardcore/metal demo. In fact, most of the best tracks from the demo didn't make it to the album, and the tracks that did were changed drastically. The demo has a raw sound, Raybeez' vocals sound good, and there are some rippers. Basically they should have released the demo as the album. A different album cover wouldn't have hurt either. The title for track 1 is "Out of Control" and track 5 is "On the Run". Also included is six songs recorded live at CBGB in 1992. Great sound.

Luckily Warzone's rock phase didn't last long and they continued to put out hardcore records throughout the '90s. The "Lower East Side" album released on Victory in 1996 has some re-recordings of classics that were never properly recorded in the '80s. I kind of lost interest at that point. For me the band peaked around '86, but remains one of my favorite NYHC bands ever. RIP Raybeez. 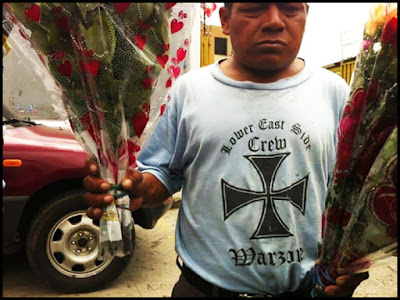