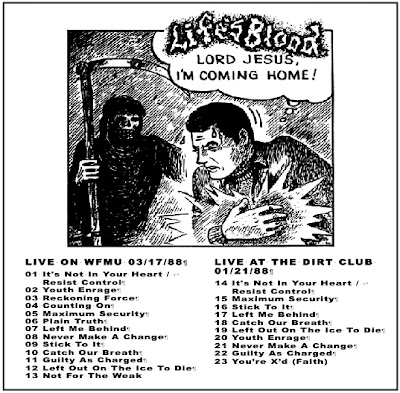 In anticipation of the Life's Blood discography that's coming out on Prank Records i've decided to post some great sounding live sets. Enjoy!

The first set was recorded live on Pat Duncan's radio show on WFMU in NJ on March 17, 1988. Four of these songs (It's Not In Your Heart, Resist Control, Maximum Security, and Left Out On The Ice To Die) wound up on the Life's Blood / Sticks & Stones split 7" released on Forefront Records in 1990. The set was engineered by Dan X. of the mighty NJ punk band A Priori. Three of these four songs were never released until this split, and the only studio versions that exist (that i know of) are the Don Fury studio outtakes from the demo. You can download those songs here. I was lucky enough to snag a copy of this split from Pat Duncan when one of my old bands played live on his show back in '90. I played the hell out of that record, and since then have always considered the WFMU set to be my favorite Life's Blood recordings. This is a really nice sounding set, super clean, perfectly re-cut, and ripped at 320.

The second set was recorded live at the Dirt Club in Bloomfield, NJ on January 21, 1988. Probably the best sounding Life's Blood live set i've yet heard. This was the band's first show.

The cover image i used was the original art for the Defiance 7" (released on Combined Effort Records in 1988), which was scrapped in favor of the Lamont W. Harvey illustration. 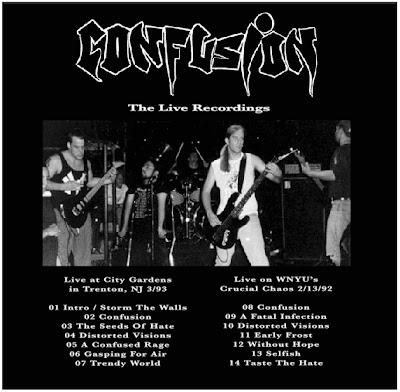 This was a really good show.
Not packed, but the kids who were there were into it for sure.
A fight broke out during our set and our singer was pretty vocal about his opinion on it to say the least.
The drummer for Breakdown at the time got arrested after they played for attacking the promoter over $.
The promoter Randy did indeed pay us though... perhaps because we didn't threaten his life?
I made friends at this show with people I still know to this day, nearly 20 years later.
I was wearing a sweet Carcass shirt at this show.
My hair was long as hell.
We had no shirts for this show and had ran out of our 7" at the time.
Good memories of this whole set for sure!

I remember it was really really cold out, the day before Valentine's Day.
I remember Johnny Stiff was the host and he was cool to us... still cool to this day!
I remember this was my second time playing on Crucial Chaos, as my first time was in 1989 with CLOSE CALL.
I remember no one could hear a word I was saying as the 2nd mic was not on, ha!
Listening to it again, it is funny how hard we were promoting a 7" that was not yet finished and would not even come out until about 7 months later.
Fun times! I miss Crucial Chaos.

Damn, this took a year to get here., but i'm really excited this finally made it to the blog. If you're a fan of this band's demos you will be floored by these recordings. Massive stuff here. The Intro to the City Gardens set is such a monster song. Kills me every time. For band bio check out the previous Confusion post. Enjoy!