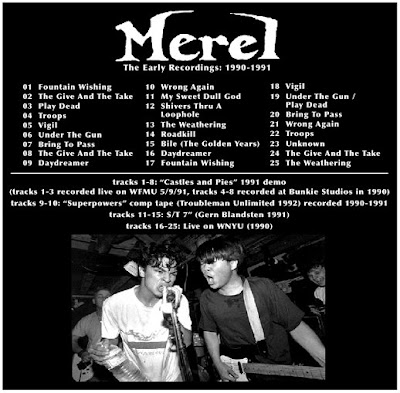 Merel were a hardcore band from New Jersey, and simply one of my favorite bands of the early '90s. By the time they released their only full length in 1993 (s/t on on Gern Blandsten Records), they had the emo tag firmly attached to them. But the material they recorded the years prior was just chaotic and melodic hardcore at it's best. The live version of Fountain Wishing (later re-recorded as Roadkill) sends shivers down my spine. To me it's one of the best hardcore songs on the '90s, if not of all time. This is a collection of the band's recorded material between 1990-1991. Most of it is not on the discography CD. It should have been. Enjoy!

The "Castles and Pies" demo was released in 1991. The first 3 tracks were recorded live on WFMU in May of 1991, and are my favorite tracks in the collection (they actually appear last on the actual demo, but these songs belong up front). The remaining 5 tracks of the demo were recorded between October and November of 1990 at Bunkie Studios. Back-up vocals on the live version of "The Give and The Take" by Justin. All other back-ups by the Schwantzes.

The "Superpowers" compilation cassette was released in 1992 on Troubleman Unlimited Records (their very first release). The 2 Merel tracks on this comp were recorded somewhere between 1990-1991. These tracks kick ass.

Thye band's s/t 7" was released in 1991 on Gern Blandsten Records. Most of these tracks were on the discography CD, aside from the last track, "Bile (The Golden Years)". Here it is in it's entirety.


Also included is the band's entire set recorded live on WNYU in 1990.


I cleaned up all the files as best as possible, removing all tape hiss and boosting the sound. The demo and Superpowers tracks sound better than ever. This is a crucial collection of excellent early '90s hardcore. Don't pass it up.

Merel continued on until 1993. They released a split 7" with Iconoclast in 1992 on Old Glory Records, and appeared on several compilations including "Fear of Smell" (1992 Vermiform) and "God's Chosen People" (1993 Old Glory). They released their LP on Gern Blandsten in '93 and broke up shortly after.

David and Greg Leto both went on to Rye Coalition.
Posted by Stormy at 2:55 AM