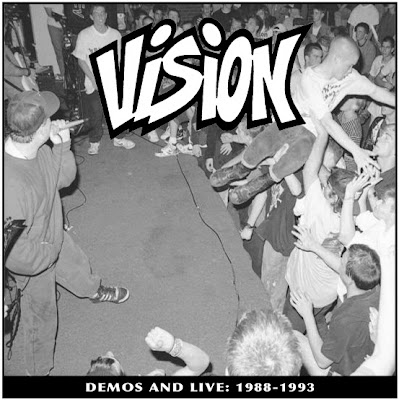 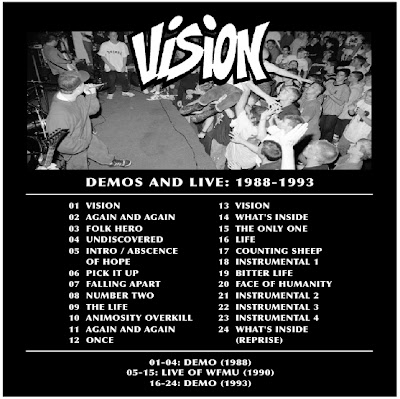 Here's another one of the great East Coast bands i discovered on Pat Duncan's radio show back in the late '80s. Most Thursdays, Pat would play songs from the 1988 demo as well as the first two 7"s. Eventually the band played live in the studio. The first time was either '88 or '89, i forget, but as usual for back then, i recorded it and played it endlessly. That tape, along with most of my tapes, was lost by the mid '90s. Recently i was lucky enough to get a good sounding rip of the band's second trip to Pat's show on WFMU in 1990, along with the '88 demo. I also dug out the 1993 demo that a friend ripped for me years back, and cleaned everything up as best as possible. This collection of Vision recordings really shows the bands diversity. From punk with DC "Revolution Summer" and indie rock influences, to ripping hardcore punk, to full on metal. Dig in: 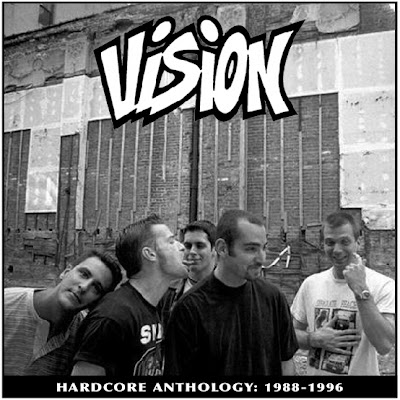 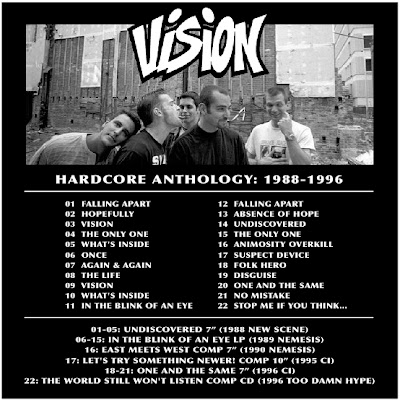 Here's an anthology of my favorite Vision recordings spanning 1988 to 1996. I wanted to include the band's great 1987 debut 7", but unfortunately i couldn't get a rip of the vinyl, and the recordings that appear as bonus tracks on the CD version of the band's second LP from '92 (Just Short of Living) skip like crazy. I tried to fix the skipping problem, and put way more time into it than i should have, but gave up in the end as it was driving me nuts.

The Undiscovered 7" was originally released in 1988 on New Scene Records. It was re-released on CI Records in 1996. The four tracks on this 7" were later re-recorded for the band's first LP, but these versions remain my favorites, and just my favorite Vision material all together.

The In The Blink Of An Eye full length was recorded at Trax East Studios in South River, NJ in May of 1989, and was released on both LP and CD in 1989 on Nemesis Records. It was re-released on Tacklebox Records in 1997. This is a NJHC classic.

In 1990, Vision played The Country Club in California, along with East Coast buddies Killing Time and Sick Of It All, and West Coast greats Carry Nation, Chorus Of Disapproval and Point Blank. Out of this even came the Hardcore 1990 - East Meets West compilation 7", released on Nemesis in 1990. The Vision track is a brutal live version of Animosity Overkill, a song that wound up on the band's (much more metallic) Just Short Of Living LP in 1992. This version kills the studio version in my opinion. The East Meets West track was later included on the Best Of Nemesis Live CD in 1995.

The One And The Same 7" was recorded January 19-20 of 1996 at Trax East and released on CI Records the same year. It was also released on CD with various ep, live, and comp tracks as a bonus. After nearly 10 years, this ep is a return to the band's more punk sound from their early days, and i think much better than anything else they released after 1990. During this time the band also recorded 2 excellent cover songs. Suspect Device (Stiff Little Fingers), released on the Let's Try Something Newer! compilation 10" on CI Records, and Stop Me If You Think You Heard This One Before (The Smiths), released on The World Still Won't Listen - A Tribute To The Smiths CD on Too Damn Hype Records.

Vision was founded by vocalist Dave Franklin, who originally played in Neurotic Impulse, formed in 1986 in Bridgewater NJ. You can read more about the band's history here.

Thanks to Jason, Gen, Mike and Coregasm for helping out with the music.
Posted by Stormy at 8:20 AM